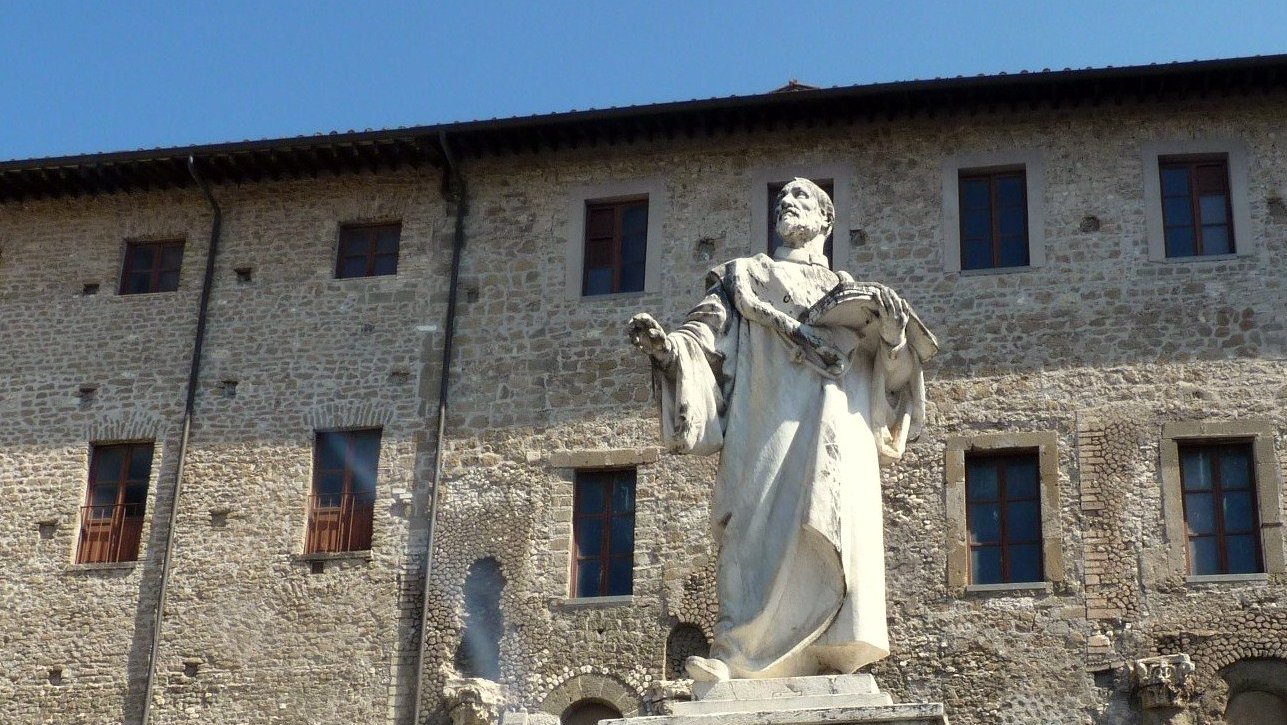 Palestrina is most certainly the sixteenth-century composer who printed almost all of his music production. The fact that his career developed in Rome, centre of the Catholic world and of important figures of the Church, contributed considerable for the numerous books of masses, motets, hymns, lamentations among many other works that make the volume of his music production.

As already mentioned this Alma Redemptoris Mater is set for eight voices divided into two choirs. The antiphon was to be sung during Advent until the feast of the Purification. The source where it survives is a manuscript from the musical library of the Collegio Romano, a Jesuit institution at the heart of Catholic Rome founded in 1551 by St. Ignatius of Loyola himself. It was edited in the volume VIII of the Palestrina Edition by Franz Espagne in 1876.

This setting of Alma Redemptoris Mater was originally intended for two choirs that never overlap, which is usually sung in modern performance by a four-voice choir. In the 1876 edition, the antiphon (identified as a motet) is presented as a polychoral work and is basically divided in three major sections. I believe that Palestrina created this as a non-overlaping polychoral composition mostly for stereophonic effects. Choir I has the first section, from the intonation of “Redemptoris mater” until “qui curat populo”. Choir II follows with the second section, from “Tu quae genuisti” until “Gabrielis ab ore”. Both choirs join in unisson (merging into a four-voice choir) for the final section “Sumen illud ave… amen”.

If placed at each side of the nave the effect would be very interesting. This kind of musical arrangement, reminds me of a work I’m studying which are the Improperia by Diogo Dias Melgaz for the Adoration of the Cross on Good Friday and the sequence pro defunctis Dies irae. Both works are for eight voices divided in two choirs, with the improperia having two moments for eight voices, and in the sequence choir only overlap at the last note of one choir and the first note of the other.

The predominant texture in this work is homophony. Here is a very effective way of delivering the antiphon text using the most direct devices at the composer’s disposal. The polychoral nature of the work forces a more proeminent homophonic texture which also suggests that both choirs would be distant from one another since, if closer, there would be a brief moment of more dense imitative counterpoint.

In the homophonic sections it is interesting to note one detail that often passes unoticed that is the entry of the choir and the various degrees in which Palestrina sets these entries. First of all, we have two types of choir entries: in the first type all voices entry together, generally after a a cadence (usually followed by a general rest) this was considered as a very strong entry. The second kind is often of less importance and, although following a cadence (which falls as a ponctuation moment in the text), one of the voices is delayed from the other three, usually at the distance of a seminima. This is clearly a intermediary punctuation moment, and is a device often used by late sixteenth- and seventeenth-century composers for dealing with homophony. It was thought that all voices entering at the same time was a very strong movement, that should be scarcely used. Entries should be anticipated by a general rest, which was used for crucial moments in the text discourse, or by delaying or anticipating one voice to the other ones. In this setting it appears right at the beginning, after the word “Mater”, with the bassus anticipating the word “quae” in relation to the other three voices.